We just shipped out all the winnings today!

There were a couple of you who haven’t confirmed yet so we’ll wait until we can get a hold of you before sending them out. But expect them soon and be sure to share with us some photos of you and your swag!

We actually got a small but really fun care package today. In it (from left to right) is Elizabeth Bathory, The Little Match Girl, Miyamoto Musashi, Steampunk Moriarty, and Aladdin. The photos really don’t do any of them justice. Once the next batch of characters come in (can we say Jabberwock???), I’ll arrange some better studio photos for you all so you can see a professional version of the Sacred 40 and other minis.

For those interested in seeing these, please visit our latest update on the Fairytale Games: Minis Campaign. Also, our website (www.thefairytalegames.com) has some new WIPs there…. maybe even the Trinity???

Steampunk Edition and Super Fairytale Fighters 2! And yes, we’ll go over some schedules 🙂

If you are not interested in information on things outside of this campaign, please ignore the following.

Ok, for those who went to GenCon or are following us on Twitter and our website (www.artisticjusticegames.com), you’ll see that we had something else cooking these past several months. It was a stroke of fate, but one of my own personal dreams had come true. We acquired the license for both Bruce Lee and Brandon Lee! YES WAY.

So what does that mean? Well, because of contractual agreement, we had created a separate team of artists and project leads to work on this project, to avoid any interruption on the Fairytale Games end.

We are proud to announce that the creative minds behind the gameplay design are none other than Kevin G. Nunn and Luther Bell Hendricks V, gameplay designers of Sentinel Tactics and Schlock Mercenary! Though we have the framework and overall concept, their goal is to ensure that Dragon Tides is a fast paced game that offers great replay-ability for casual gamers and dives even deeper for the more advanced gamers.

Think of this game as a tribute to the action genre, martial arts movies, and video games such as Double Dragon, Streets of Rage, and Final Fight. The game is broken up into chapters and scenarios that drive the story for the game and its characters.

1-5 Players will utilize Bruce, Brandon, Viktoria and Luke as they delve into their individual story lines, bringing their own gameplay elements to the table as they go up against the “Tiger Organization”. This is a Miniatures, modern day dungeon crawler using custom dice and card combat. One of the KEY FEATURES is that the story is non-linear and will branch out to different encounters and battles that will strengthen or weaken the Tiger Organization for your final battle against the boss. This is very much an action film come to life!

The minis follow slightly smaller size specs as our Fairytale Games: Minis Campaign to keep them fairly standard to many Tabletop games out there. The bases are about 35mm and the height is somewhere between 35mm-40mm.

So when does the campaign launch?

Now. Actually right now. As I hit the update button here, the team is simultaneously hitting the button for the kickstarter campaign. Check it out here:

We have a lot of awesome collaborators having characters making a guest appearance in Dragon Tides through this Kickstarter Campaign. Level99 Games, Soda Pop Miniatures, Marrow Productions, Greenbrier Games and Greater than Games just to name a few. Get ready to be excited! 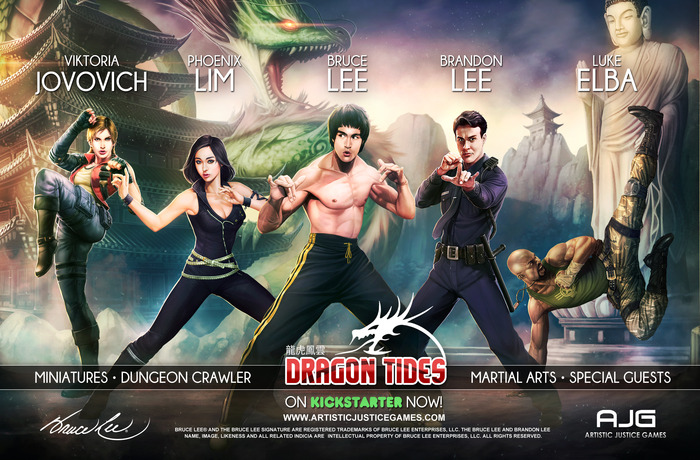